Here we go – another off-shoot of my Nota Bene vertical tasting from earlier in January. This is something that I think is an extension of many other articles that I’ve been writing lately. On we go…

Why bother buying a bottle of wine and then waiting 7 years to open it? How ridiculous is that? Why do some people do it?

I’ve had more than a few customers guffaw at my suggestion that this or that wine can be aged for up to 10 years. The typical reply is something like, “Wine doesn’t last more than a few days in our house!” and then they look to their spouse / friend / entourage for the requisite approving laughter.

Most wine made today isn’t meant for long-term ageing. I remember a wine teacher of mine saying that 99% of all wine produced is meant for consumption within 2 years. Most of it probably will be anyway regardless of the producers’ intent.

So what is the point of ageing wine?

Mature wine tastes different. A well made wine is smoother, more complex, and full of nearly unidentifiable aromas and flavours that would not have been apparent without age. The way that I describe it to customers is that young wine has all kinds of easily identifiable flavours – black fruits, red fruits, cocoa, chocolate, vanilla, campfire smoke, etc. As the wine ages, those flavours will change, mutate, and intertwine into things like coffee, burned almonds, and maybe blueberry teacake. As the wine gets even older, the flavours become less easy to identify. They turn into something that still smells good but for some reason just doesn’t trigger a sense memory as easily. This is where the most bizarre descriptors, that some people like to make fun of, are often used. A very good taster will be able to perceive some of these aromas earlier on in the life of the wine and be able to predict what will happen as it ages.

Up until about 50 years ago, wine making technology had not yet evolved to be able to make a wine that was palatable when it was young. Only certain areas producing softer wine styles (like Beaujolais) were able to produce wines that could be consumed very young. According to the Oxford Companion to Wine, mature wine was preferred in the Roman empire and it was also possible that the Greeks aged their wines as well. It was not done in bottles as we know today but rather in casks (barrels and larger vats). 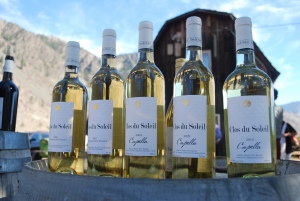 Bottles sealed with corks became available for ageing in the 17th century but this did not become widespread even by the time of Thomas Jefferson in the early 19th century. Bottles were (and still are) difficult to transport safely without breaking so bottling at the destination was common until the early 20th century. Even still, the wines weren’t really ready to drink.

It wasn’t until the invention of certain winery techniques and technology that people were able to make wine that was ready to drink sooner. Protecting the grapes, juice, and young wine from oxygen was a new thing in the 20th century. Fine filtering was new as well. Fermenting the whole berries or even whole bunches of grapes without crushing them first made the resulting wines fruitier with less grippy tannins and therefore, easier to drink sooner. This, I think, is the New World’s biggest stylistic contribution to the world of wine.

Of course, that march of technology didn’t just end with that. Membrane filters, micro-oxygenation (a technique pioneered by winemaker Patrick Ducournau in Madiran, France to tame the insane amount of tannins in that appellations’s Tannat grapes), reverse-osmosis and spinning cones, yeast nutrients, and bags of tannins, acids, and colouring agents all give wineries the ability to manipulate all kinds of aspects of a wine’s flavour profile so that the wine is smooth, tasty, and easy to drink almost immediately. The result was smooth wine in no time at all. It was wine for impatient people.

Don’t get me wrong, there is nothing wrong with that at all. We need wine in the marketplace (and to be perfectly honest, in my house) that doesn’t have to be aged. What I am interested in here is encouraging people to try saving some of those bottles that are capable of ageing because I think they are missing out on some truly amazing wine experiences. From my point of view, it’s like watching someone purchase a Ferrari who only plans to use it to get around on slow city streets and never take it above 2nd gear. Buying a top-quality, age-worthy wine and drinking it within the next 6 months is really missing out on a great experience. I encourage everyone who buys those kinds of wines to hold on to at least one of them for a little longer.

It’s not only red wines that can age. We’re very lucky here in BC to have an abundance of natural acidity that Rhys Pender MW claims other wine regions around the world would love to have. It is acidity that helps preserve whites for long-term ageing. He mentioned that as part of the 5 year vertical of Clos du Soleil that I attended a couple of years ago. The complexity of the flavours was astounding and I enjoyed every single wine in the vertical of Capella. (I very much regretted drinking my 2007 white – it wasn’t called Capella then – far too early.)

Here is a list of some BC white wines that I’ve had success with ageing, either on my own or as part of tastings or events (in no particular order).

I may have forgotten some but it’s a start. It’s not easy predicting which wines will age and which ones won’t. I’m had some go off that I thought would be sure to do well. Unless the winery has been in business longer than 10 years (which is not very many of them at this point), they won’t really know either. They can tell you what they think will happen based on what the winemaker has intended to happen, but that’s not always a sure thing either.

In the end, it all comes down to personal preference. If you haven’t ever had an aged wine, there’s a possibility that you might not like it. If you don’t like the aroma of apples and flowers soaked in kerosene, don’t age your Riesling because that’s very likely what they will become. I’ve had aged Riesling and I absolutely love those aromas so I know that’s what I’m interested in waiting for.

So I encourage you to try, just try, to put a few bottles away of wines that you enjoy and want to see through to maturity. It takes the whole wine experience to another level.