I originally started this post back in early August because it was the first time that I could actually sit down and do some proper writing here. Jobs and other large projects had occupied my time up until that point. 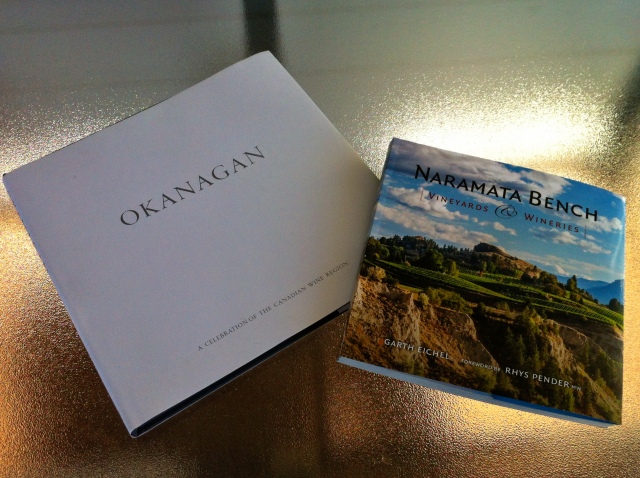 Two books have been appearing not inconspicuously on wine shop shelves this year and as a lover of B.C. wine for many years, I have developed a reflex to buy them as soon as a new one comes out. I have even bought some books twice or even thrice as gifts or when a new edition are released. The thrill of reading about the people, places, and wines never gets old for me even though at this point in my career I now know many of the people personally. So while I am freely open to admitting that I can go for days without having to take a sip of wine, it is a rare occurrence when I can make it through a day without reading about wine. Wine books are almost more addictive for me than wine itself.

The two new books this year are “Naramata Bench Vineyards and Wineries” by Garth Eichel and Taryn Liv Parker’s “Okanagan“. Both are regionally-focused and both contain stunning visuals with real experience-based descriptions of the profiled wineries. By that I mean that they don’t just simply review the wines and tell the ‘official’ story of the winery. Instead they try to tell you what it would be like for you to go there. This is a crucial difference from most region-specific wine books which offer a spew of generalized information – facts ‘n’ stats – about the history of the region, the terroir, the wines, and the producers of the area. This experience-oriented style makes both of these books approachable and in my opinion a more honest representation of what the reader will experience if they go to visit the same winery. The drawback is that that at times it can lack depth for people who might want to know some of those specifics. 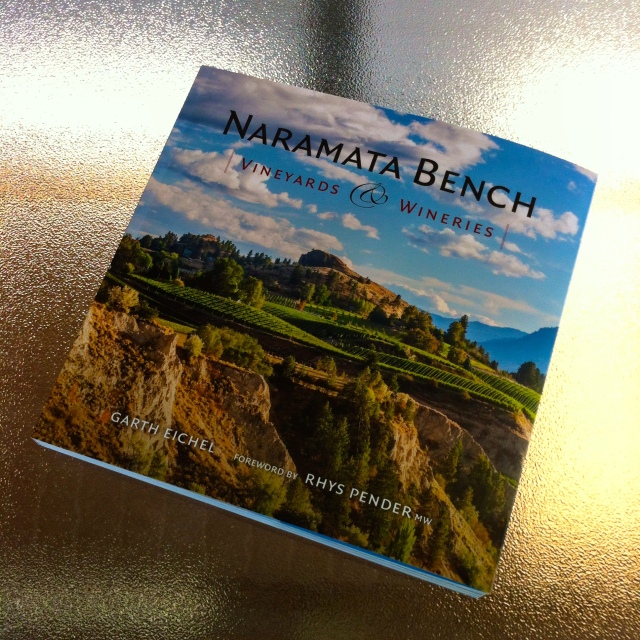 Producing a book about a visually stunning place like Naramata and having it not be equally visually stunning would have been ridiculous. That is not the case here as the book is loaded with great photos and excellent layouts. The trick with photographing any wine region is to make it look interesting in a new way. Of all of BC’s wine regions, Naramata has probably been photographed more than any other so the onus was entirely on Eichel to show us something new and avoid clichéd shots that any tourist can capture.

He accomplishes this with diversity. Sure there is scenery – that’s unavoidable – but there are close-up details (Therapy’s weather vane), portraits of owners and wine makers, contributed older photos (Bob and Tim from Kettle Valley with their sons as toddlers), and action shots (Jay Drysdale sabering a bottle of bubbly with an axe) that make each layout exciting to look at. There’s a predictable rhythm to it and a lot of repetition (there is always a photo of someone pouring a wine at every tasting bar) but it works and shows the setting for the winery’s experiences accurately. And just like the landscape clichés, there are no “super-serious” photos of squinting winemakers holding a glass up to the light to “examine” it. Eichel thankfully has avoided this with excellent creativity with the camera. My favourite feature however is that each photo is also suitably captioned with details specific to each photo – wonder but often overlooked element in a lot of wine books.

The text rolls along fluidly and is easy to read. Interviews with the owners are the basis for the text and Eichel uses lots of direct quotes in his narrative. The wineries will tell their stories when visiting the shop in person so paraphrasing is probably not the best way to communicate the experience so this technique is refreshing and fits into the experience theme upon which this book seems based. 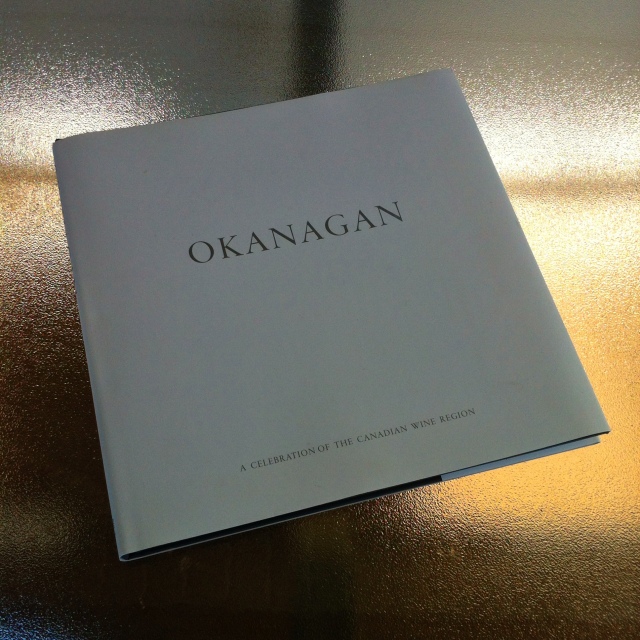 If Eichel’s “Naramata Bench” is Sgt. Pepper’s, full of colourful characters and stories, Parker’s “Okanagan” is the White Album, absolutely anchored to its time and place. It’s physically huge and heavy with a hard cover giving it the same imposing effect of strength similar to large pillars on the façades of banks and courthouses to denote security and authority. The blank white cover simply and elegantly adorned with the word “Okanagan” suggests something epic while the small subtitle near the bottom acts as a perfect tease to the book’s contents. Rather than loudly advertising the fact, Parker’s cover is subtle and uncluttered and let’s the colours inside the book explode more vividly when flipping through the pages.

To me, this book looks and feels more Okanagan. The rough texture of the pages, the high-contrast photos, the light sand-coloured text boxes and highlight squares throughout the book all appear more like something produced in the Okanagan to me. If anyone from around the world wants to know what it’s like to be in the Okanagan, this is the book that I would send them. The layouts give me the impression of a high school or university year book (Oh, there’s a photo of Mike! Hey, there’s Virginia!) which I believe is a perfect form for conveying that very sense of time and place. When I want to relive how I felt working in this industry in 2014-2015 (when this book was in production) I will absolutely pull this book out. It is truly a temporal work of art.

Her attempt to look at the region as a whole entity of the Okanagan not just through the obvious physical elements like geography, but also through time – history. To my delight, Parker seems to be aware of the Okanagan’s past and appreciates its influence on the present. No other B.C. wine book that I’ve read has ever included a photo of Velma Sperling, grand-daughter of Giovanni and Rosa Casorzo. Giovanni was hired by Father Charles Pandosy to work at the Oblate mission. Velma is a living link to that era of our history that roots today’s wine industry and continues to help it grow. The same land is still in the hands of the Casorso family and Velma’s daughter Ann Sperling, also photographed in this book, has a highly distinguished career as a winemaker.

Each winery’s entry gives a snapshot of their style. A list of the property’s signature wines, key varieties, and vineyards are an quick guide for anyone interested in specific varieties. The section “The Property Experience” is a point-form listing of events and special offerings. Every winery has a tasting bar, we all know that. Parker tells us more about what makes each winery unique. For those wine lovers looking for that special experience, you will find one for you while thumbing through “Okanagan”.

The biggest question I have of both books is how the wineries were chosen to be included in each one? Eichel’s “Naramata Bench” has a small section on “Other Wineries” while Parker’s “Okanagan” just doesn’t mention some wineries at all, leaving awkward holes in some of the regions. There is section on the North Okanagan but strangely, no wineries listed there. Eichel’s “Naramata” includes a near phone book of listings for places to stay, places to eat, tour companies, and travel information – all helpful items but curious for a printed book considering Google is now the de facto go-to resource for most people. Both books are self-published and must be financed somehow. However I sometimes get the impression that I’ve bought into very large advertisements, especially turning to the bizarre two-page spread on Greyback Construction, a local construction company that happens to have built many wineries. Neither book purports to be objective guidebooks or anything like that however it makes me wonder if or how the financing may have influenced the content.

This media literacy (or paranoia?) comes to me courtesy of my own “question everything” personality (or disorder?) and perhaps isn’t shared by many others, nor perhaps from the Millennial generation who care about it differently than I do. (A short stint at Simon Fraser’s Communications Department probably didn’t discourage that behaviour either…) Both books are extremely well planned and well executed highly recommend you pick up both as soon as you can. Sometimes regional books don’t make it to a second printing so don’t pass on either of these two if you see them. 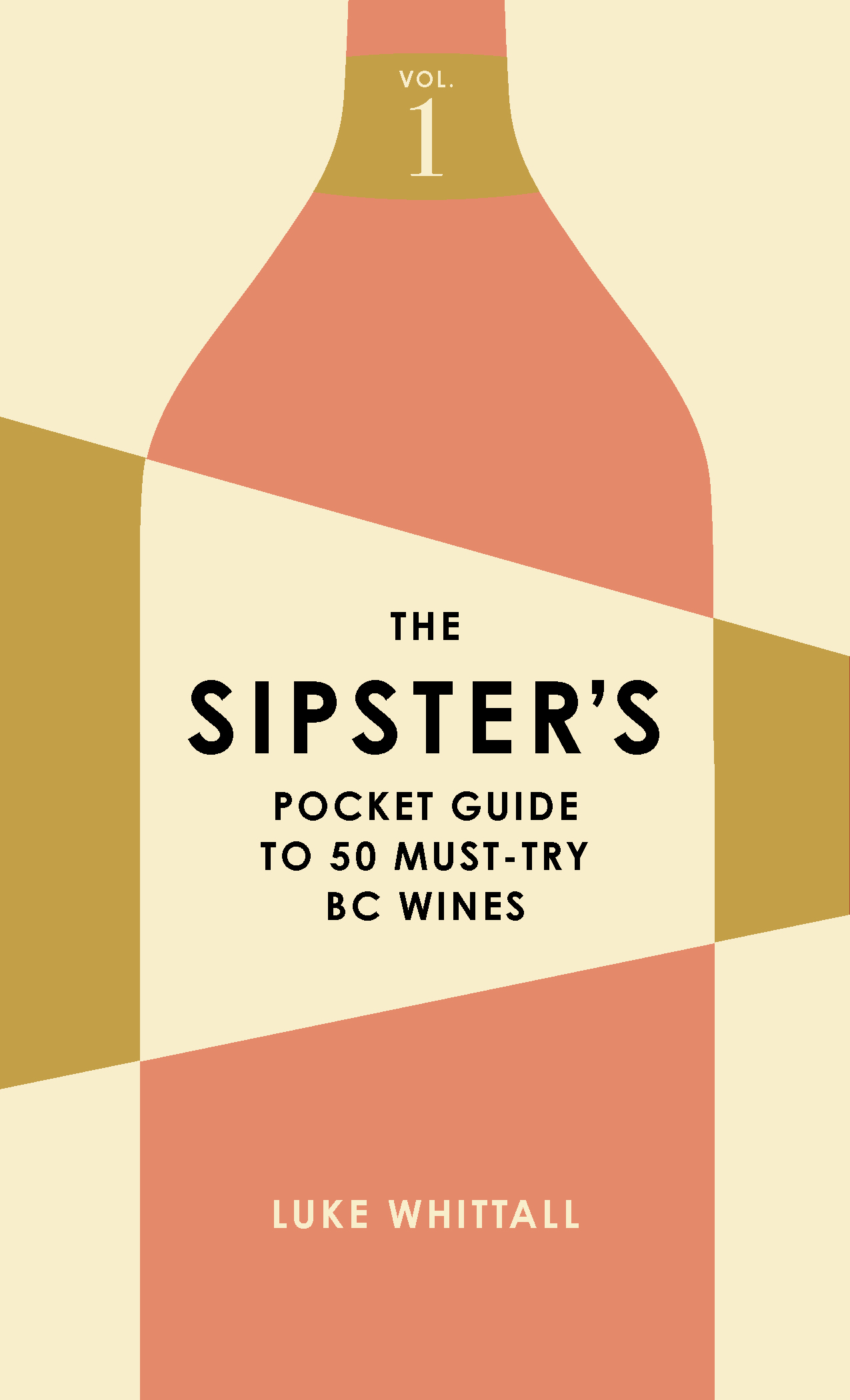