On Tuesday, November 17th, the BC Wine Institute (BCWI) issued a press release that took many in the wine industry by surprise. But it really shouldn’t have been a surprise. The real surprise might be coming later.

The new rules on alcohol in BC that were implemented in April 2015 allow wine to be sold in supermarkets. As someone who grew up in Quebec, where wine and beer can be sold in supermarkets and 7-11 corner stores, this seemed like a logical move. But B.C. has always had a bizarre way of dealing with alcohol throughout the province’s history and, true to form, this recent change was no different. In Quebec (or Washington State for that matter), it is certainly convenient to be able to purchase wine with groceries but from my experience in both of those places, the wines sold there are never considered “top quality” wines. To have VQA-only wines in supermarkets here seemed at odds with what I’ve previously experienced.

Ok, so what’s the harm in trying? There’s only one way to find out if this will work and that’s to just do it. From what I’ve heard, the four Surrey locations are blasting through amazing amounts of wine and that the whole Save-On-BC-Wine thing is going to be very profitable. That means that the VQA licenses in outlying areas might be better used in more profitable locations and that is always going to be the Lower Mainland.

What shocks me about the closing of the VQA stores is how little coverage it is getting in the media. Tracy Gray of Discover Wines was on Kelowna’s CBC this morning being interviewed about the closure and was very diplomatic about the whole thing. Too diplomatic for host Chris Walker’s taste at times which seemed to inform his seemingly off-the-cuff question about whether or not Gray had been coached by the BCWI in advance of the interview. Gray, always a professional and an excellent and elloquent speaker, responded to all of the questions calmly but with an air of detachment that seemed at odds with the facts. Discover Wines, her twelve and a half year-old business and the number one VQA store for sales every year, was going to be shut down Arthur Dent-style early in the new year to make way for a hyper-profitable retail chain. Even if Gray didn’t show it outwardly, Walker understood what it is that we stand to lose: Our wine culture. The interior will lose out on those great stores filled with passionate, knowledgeable, and helpful staff members who know the wines better than anyone except the winery staff themselves. They are front-line contributors to local wine culture.

And of course this comes with a disclaimer – I used to work at a VQA store and understand how it functions differently than a regular wine store. I also currently work for a winery that sells wines to those VQA stores. Since 3/4 of them in my territory are closing, I stand to lose out on a little chunk of commission. Yes, it will be a owee. But there are bigger things at risk in the longer term.

The light media coverage so far shows me what I already knew beforehand from my own recent experience. People (the general B.C. public that buys wine) have forgotten what VQA means in the first place. It didn’t dawn on me until I worked this past summer as a wine tour guide. I was amazed at how many times that I had to explain to people from B.C. what VQA stood for and what it meant. I’ve had to explain that to people in wine shops and wine stores more and more over the years since I started in the industry. It’s like the industry just assumed that people knew what it was all about.

Here’s a bit of the backstory:

When the wine industry as we know it today was in its infancy in the 1980’s, estate wineries had an uphill battle to prove to consumers that it was fit for human consumption. Canadian wine had a bad reputation. The Vintner’s Quality Alliance was an industry-lead quality assurance 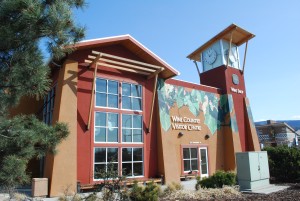 program that acted as a “seal of approval” from the industry. The VQA logo on a bottle of wine meant that this wine was considered to be a quality product.  By 1996, the BC Wine Information Centre opened in Penticton (with wines from over 24 wineries!) and was the first stand-alone VQA store. Other stores followed effectively with a mandate to sell B.C. wine and be the defacto community resource for people to learn about their locally produced wines.

It worked. VQA wine sales shot up. Wineries opened throughout the 1990’s at a furious pace. Predictions in the early 90’s that by the end of the century, that B.C. could have at least 100 wineries! Imagine that! Of course at the time, there were only a quarter of that so it seemed like a lofty goal. The optimism in the industry then was a result of VQA and was a complete 180 from only a few years prior when Free Trade was supposed to wipe the industry out  completely.

But something happened in the intervening years. The wine industry continued to grow but not everyone was on board with VQA. Jeff Martin was noticeably absent from VQA when he started La Frenz. (For a great interview with Martin and his thoughts about VQA, check out Calli’s podcast on the subject from 2014.) Other producers followed as the need decreased for VQA to convince consumers that quality wines could be produced in B.C. Consumers knew that B.C. wines could be good already and smaller producers didn’t feel the need to pay the added cost to be a part of the program.

I can see both sides of that argument but that isn’t the point of this article. My point is that over the almost 25 years that we’ve had VQA in B.C., the vast majority of casual wine buyers still do not know what it is and likely have never set foot in a VQA store. Thus, the quietest of media uproars over the recent VQA store closures in the Okanagan.

The issue here is profits. Wineries are businesses and have to make money to survive. The Vancouver is where the customers are and most wineries’ allocations are sent to the Lower Mainland anyways. Having them in a Save-On is far more profitable there than having a nice stand-alone store in the Okanagan where people who do enjoy local wines can (and sometimes do) go right to the winery to buy them. Only time will tell if the new Save-On-BC-Wine model will work in the long run (and who it is that will actually profit the most from it) but I think it’s safe to say that wine will follow where the money is. This BCWI list of VQA stores will have few, if any, locations on it outside of the Lower Mainland in the not-so-distant future. How will that effect the wine culture in the interior of the province where most of the wine comes from and where tourists expect to find it? I guess we’ll all find out in 2016.