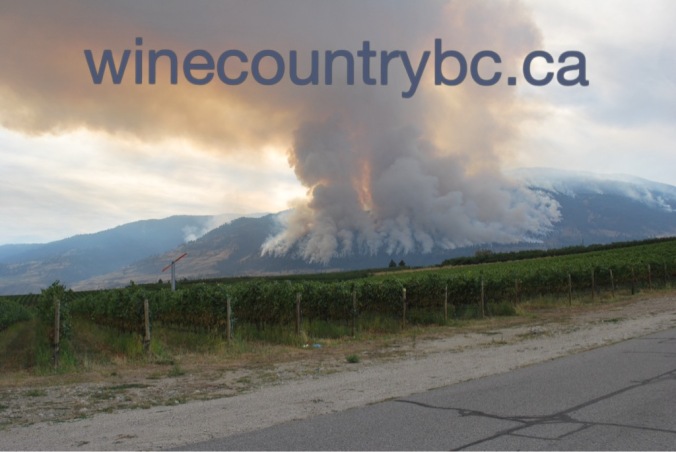 I noticed lately that there hasn’t been a whole lot of action on social media this summer regarding #bcwine. A quick scan of that hashtag on Twitter reveals that very few people are posting anything that involves scenery in any way, even from accounts that are normally filled with beautiful wine country views. This also includes my own twitter account as well as another for a winery that I manage.

Of course the reason is that we have been largely smoked out for most of the summer. It’s one thing to have clouds clog up the valley (which is something that happens in most winters, making it very dark all day – they don’t put that in the brochures) but it’s another thing when it is smoke from forest fires. Smoke is insidious that way. We can’t get away from it by driving up to higher elevations like we often can with clouds. It turns the sun and moon red. It also smells bad and takes away the natural aromas of the seasons.

For those of us in the industry, there could also be another odd by-product of the smoke: self-censorship.

In 2015 I posted photos of the Mt. Kobau fire near Oliver as it happened because it was interesting, so close at hand, and was part of life in wine country as I saw it. It was a controlled burn that the forestry people were doing because the conditions were perfect for it. It looked like a volcano for a couple of hours and it made some dramatic looking photos so I posted it somewhere.

I was soon sent messages by more than a few people in the industry telling me to stop because I was giving people the ‘wrong impression’ of what it was like and that it not helping to bring tourists to the valley. I was told that the media was blowing things out of proportion and that it was keeping visitors away.

That was all entirely possible. Tourism plummeted that year during the last part of the summer as people cancelled hotel bookings and changed their plans. Business was down for a lot of places and there were noticeably less people driving through the Okanagan at that time of year. The smoke from the fires (most of which was from a much larger fire across the border in the US) literally choked the valley for a few weeks that year.

The same happened this year except that the fires were nowhere near the south Okanagan and fires in the north near Peachland and Kelowna did not start until later in the summer and one is burning right now across the river from Cawston. Arguably, the smoke this year was less worse than it was in 2015 but it seemed to last a whole lot longer. By the end of August, I realized that I hadn’t seen a blue sky in weeks nor had I taken any photos at all. The landscape just wasn’t as pretty as I knew it to be and didn’t think it very interesting to document. The light was flat and diffused making everything bland, flat, and grey.

This is one reason why I chose not to document much of the scenery this summer but maybe I shouldn’t have self-censored so much. The point of documenting something is to be able to recall it properly later. The Okanagan that pretty valley with a big lake in the middle  all year long – there are some really dark days in the middle of the winter that are just depressing, but nobody visits here at that time for the same reasons as they do in the summer.

One of the major reasons that I started this blog in 2009 was to document the Okanagan’s wine industry year round, to go ‘beyond the guided tour’, and show what it was like to live, work, and be in the place that makes the wines that we love. If wine is tied so much to a place, why is it that most people only see the best facets of that place? The beautiful vineyard photos that start off every issue of Decanter show some pretty amazing places but they probably aren’t that amazing every single day of the year? Why do we sell-censor? What do we have to hide? The wines come from this place, warts and all, so why try to put such a squeaky-clean face on it all of the time? Truth is always more interesting and complex than a misleading image and if smoke is going to be part of the Okanagan’s reality in the future, perhaps due to the changing climate, then we can’t deny that. People still flock to Victoria, BC at all times of the year even though people are clearly aware of what they are in for when they go. It’s really not a place where sunshine is a forgone conclusion (although I’ve heard that this past summer was very good for sunshine).

As for me on this website, I will continue to tell it like it is. There is a lot to experience here and to miss out on it because of self-censorship is not constructive nor valuable in the long run.